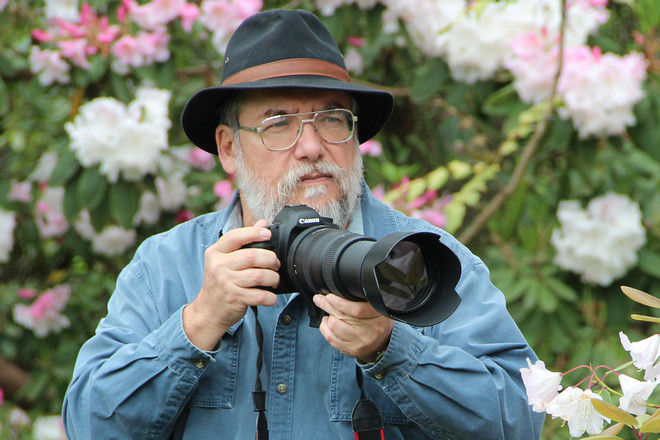 As a nature photographer Greg has a keen interest in the state of our urban environment - the world outside our front door, up the street, city parks, downtowns and school campuses. He believes that the average person should spend more time noticing the world around them and focus on where we live. People need to feel what it is like to be connected to their own environment to become emotionally and intellectually aware to be behind environmental movements of a larger scale. Greg’s hope is that people, organizations and governments will realize that appreciation and protection of the urban environment can only lead to a better world for all of us.

Greg took photos as a child, but his real fascination with photography started in architecture school. His first camera in college was a Petri 35mm camera he bought from a Vietnam vet that was in the architecture program with him. His first use of the camera was on an architectural design project dealing with an 85 acre parcel owned by the Natures Conservancy between Harrisburg and Halsey, Oregon. The design project required photos and an intimate knowledge of the natural acreage and a site for offices in downtown Eugene. The Petri camera, a black and white darkroom, and his design team proved to him that he could with others justify his logical beliefs about his surroundings.
From the Petri he moved quickly to a Canon F1 single lens reflex camera with a 55mm macro lens. Eugene’s downtown was going through urban renewal at the time and Greg worked hard to photograph the old downtown before the wrecking ball and then the new downtown pedestrian mall going in piece by piece.
Most of his work was black and white photos to this point a medium he stills favors in fine art photography, but with a move into the jewelry business color macro photography became his main emphasis. This would move him to a Hasselblad 500 EL/M camera to do studio work to produce a jewelry catalog and national magazine advertising.
After the jewelry business he continued his photography with outside nature photography but found his Hasselblad studio camera battery life to be very unreliable.
He moved back to 35mm and then on to digital while getting into the landscape design and construction business. Digitally he has gone from a Sony point and shoot, to a Canon EOS 20D, and now to the Canon EOS 5D Mark II a 21megapixel camera with exceptional clarity.
His photography is enhanced with by his background in jewelry, architectural and landscape design and construction. His years of experience have honed his eye to focus on and appreciate the details present in nature.

Most of the photos on this website were taken on walks in the city of Eugene, Oregon. Greg hopes they will encourage viewers to notice their own surroundings. Unless the photo gallery states that the photos have been cropped or modified in any way, photos are shown untouched at full frame straight from the camera in jpeg format.
Nature is a fascinating and sometimes an unusual experience but it is rarely perfect. If the photos are modified in any way it will be to correct a spot caused by dust on the lens or image sensor in the camera or problems with lighting or contrast. Digital retouching in Photoshop is not what these photos are about. Instead, they are about encouraging people to notice and appreciate their own environment, be it urban, suburban, or rural.